Last Friday, the UNWTO held a special event at its Madrid headquarters titled “Tourism for the Ocean and Climate Action: UNWTO’s commitment to the United Nations Decade of the Ocean and COP28.” 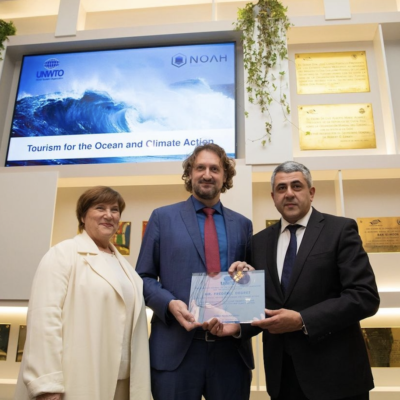 The event was the occasion of two major announcements:

➤ First was the announcement of UNWTO’s support for the “Dubai Blue Pact”: a civil society initiative aiming to put the ocean at the heart of the agenda for the next COP28, resulting in a multilateral agreement, signed by all member countries, to build a regenerative blue economy. Its ambition is to make this pledge an actionable commitment, by offering a concrete set of solutions to nations, tracing all committed actions – including a solid standards for blue carbon going forward.

This initiative, of which NOAH ReGen is a foundational member, was publicly endorsed that same afternoon by the representatives of the European Parliament, Fórum Oceano, The World Ocean Council, and Blue Carbon LLC – an organization under the patronage of His Highness Sheikh Ahmed Dalmook Al Maktoum of the United Arab Emirates. All will collaborate in a joint working group.

➤ Later came the second announcement: The nomination of Frédéric Degret as UNWTO’s Special Advisor for Oceans and Climate Action. Mr. Zurab Pololikashvili, UNWTO Secretary, said “Thank you, Frédéric for your passion. You made me passionate about the Blue.” Degret, in turn, thanked the organization for their trust and said: “The entire NOAH ReGen team and I are dedicated to kickstarting the blue revolution alongside the tourism industry.”

For more information on the subject or to interview one of the members of our team, please contact Laura Secorun, NOAH ReGen Press Officer at press@noah.blue

UNWTO The World Tourism Organization is the United Nations’ specialized agency entrusted with the promotion of responsible, sustainable, and universally accessible tourism. Its headquarters are in Madrid, Spain.